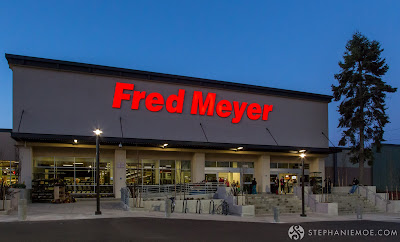 The newly remodeled Greenwood Fred Meyer re-opened on Feb. 1st to quite the crowd of shoppers and neighbors!
I can’t deny that I was very sad to see my beloved Greenwood Market (a Town & Country Market) close its doors last spring, but I tried to keep an open mind about the improved Fred Meyer that was to take its place. My dogs and I used to walk to Greenwood Market literally daily…sometimes more than once per day since it was so close to both my house and office and had such a great selection of local and organic products.  Plus the staff were so friendly.  I knew them all by name and we frequently chatted and exchanged recipes.  I’ve been a bit lost for the past year with no local grocery store within 2 blocks of my house.  I know, I was spoiled having such a great store so close! 🙂

While I haven’t explored the new Fred Meyer in its entirety yet, I can say that I was pleasantly surprised by a few things in the grocery department.  There is an awesome independent cheese shop inside the store.  I’m a cheese-a-holic so this is a very good thing and also very dangerous for me!  ha!  They also seem to have a much better selection of organic produce than the other Fred Meyer stores around town.  It seems they are making an effort for more local products as well, but I’d like to see them increase this even more.  Kudos though for the marked improvements over the other stores and a step in the right direction!

I’m curious what the rest of the neighborhood thinks about the new store?  There were some heated debates and mixed emotions about the closing of Greenwood Market when Fred Meyer decided not to renew their lease, even some people claiming they would boycott FM because of this.  I’m curious if anyone’s views have changed now that the new store is here and it seems they are making an effort to be a very positive addition to the community.  A great move on their part was for their grand opening they donated $5000 each to local non-profits:  the Greenwood Senior Center, Greenwood Food Bank, Greenwood Library, the North Seattle Boys & Girls Club, and PAWS.  Way to go Freddies!  Let’s keep up the community involvement!

Hacked with a redirect! Yikes!